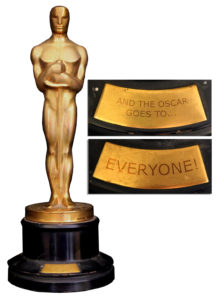 The Importance of Demographics Isn’t Important

That the demographics of black Oscar winners almost perfectly mirror the demographics of blacks in the United States isn’t the point at all. It just shows how hollow the #OscarsSoWhite complaints are.
The real point we should be making is that most industries and awards aren’t demographically representative of populations. It isn’t because Cambodians are racist that they own most of the donut shops in California. They aren’t keeping other races out. It’s just how these things happen.

Likewise, it’s not because blacks are racist that so few whites make it to the NBA. White people aren’t statistically represented in the NCAA, NBA, Olympics, or awards in basketball. Gavin McInnes makes this point when he spoofs Jada Pinkett Smith’s Oscars critique.

One movie that won’t be getting an oscar next year is 13 Hours, a Michael Bay movie about the true story of what happened when our leaders decided to play politics with the lives of soldiers, State Department personnel, and a US ambassador.
Sam breaks down the timeline of events and compares them with what we know about Obama and Hillary’s schedule. And it’s not pretty.